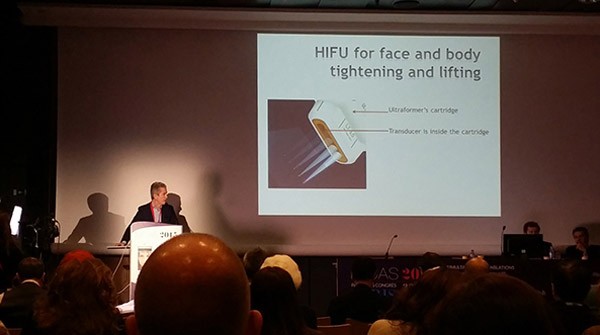 IMCAS Paris 2015 was a success for CLASSYS

CLASSYS held a symposium successfully at IMCAS (International Master Course on Aging Skin) Paris 2015. IMCAS ended on February 1, is one of the most important and largest international anti-aging courses to gather the worldwide plastic surgeons and dermatologists and to share their latest technologies and opinions.

Classys attracted great attention with its hosted symposium that was attended by a large number of world-renowned surgeons and dermatologists. Symposium was composed by speeches of Dr. Benjamin Ascher (a plastic surgeon, France), a founder of IMCAS, Dr. Michael H. Gold (a dermatologist, USA), a president-elect of DASIL, Vanderbilt Univ. associate professor, Dr. Klaus Fritz (Germany), a president of German Academy of Dermatology (DDA), a former president of EADV and ESLD, and Dr. Bertrand Pusel (a dermatologist, France), a vice-chairman of France Laser Group.

During the symposium, there was a heated discussion among the attendants about the cutting edge technology applied in Classys’s key products, Ultraformer and Clatuu.

After the great symposium, many doctors and distributors vistied CLASSYS’ booth

Dr. Benjamin Ascher, a founder IMCAS, gave a great speech for Ultraformer. He visited our booth and had a great time with us.

CLASSYS Participated in the EADV from 7 – 11th Octorber in Denmark.

The CBE (China Beauty Expo) has been in existence for 23 years and this year it welcomed over 3,500 exhibiting companies and over 10,000 brands from the beauty supply chain.